On the Sunday within the octave of the Ascension, 13 May 1934, Most Rev John Dignan , Bishop of Clonfert laid the foundation stone of the new church of Gortanumera. A year later, on the feast of the Holy Trinity, 16 June 1935, he blessed and dedicated it to the Ascension of the Lord. It was the culmination of many years of generous endeavour in difficult times by the people of the parish.
Monsignor Timothy Joyce was appointed parish priest of Portumna in December 1919. Four years later, October 1923 he and the parishioners held a meeting in the old church of Gortnacooheen, which had served the parish since 1832. The problem was to provide for an increasing population consequent on the recent division of the Clanrickard property. 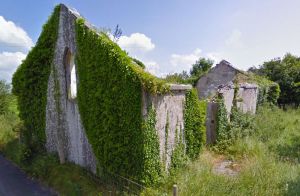 The existing church was not more than sixty feet long by nineteen feet wide. It’s condition and location made its reconstruction a problem. Fortunately, an existing church came on the market which, it was felt, might fulfill the purpose. It had been built for Protestant worship in the town of Ballygar, about the middle of the nineteenth century, by the local landlord, Denis Kelly of Aghrane.
the elders of Gortanumera, the parish priest and the bishop met in Ballygar and there and then purchased the church, which was a neo-Gothic structure of fine quality. It was carefully taken down stone by stone, all 800 tons of it, and transported forty-two miles by tractor, slates, roof timbers, railings and all, to be erected with the addition of one bay, a porch and a belfry on the commanding site on which it stands. 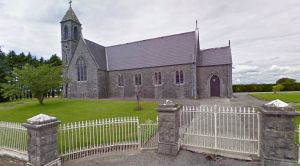 In the lean years of the twenties and thirties money was scarce among the farming community. Instead to begin with, the families mostly gave livestock, poultry, farm and garden produce to be auctioned annually. In four years £1,200 was collected in this manner. It seems so little by modern standards but it purchased the church in Ballygar. 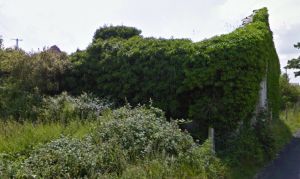 All the site work and the foundations to ground level were provided by the men of the parish working voluntarily – up to 80 of them – through the Autumn and early winter 1932/33 and the men of Boula came with their horses and carts. Individual donors provided the altar and its furnishings, the sanctuary rails and the beautiful stained glass window of the Ascension. Between 1929 and 1937 the parishioners of Gortanumera contributed by annual collection as did those of Boula and Portumna in the years 1933 – 1935 and in the year 1934 generous subscriptions were received from many parishes in the diocese as well as north Tipperary.

More recently Father Jennings erected the gallery and replaced the plain glass of the windows with cathedral glass by donation. Latterly, the church has been fully redecorated, by parish subscription for the most part, and a car park laid down by cooperative effort of the men of the parish, on a site which was donated.

The story of God’s house in Gortanumera spans thousands of years. On Church Hill stand the ruins of an early Christian church almost unique in east Galway. It is known as Lic Molaise, the balance of probability being that it was dedicated to and formed part of the “paruchia” of the celebrated St. Molaise, or Laisrian of Devenish on Lough Erne.

The parish retained the name, as it does to the present day but the Normans changed the dedication to St. Michael and William de Cogan granted patronage to the Cistercian Order. Their house in Portumna was vacated to be re-occupied by the Dominicans, but they retained the rectory of the parish while the vicarage was staffed by secular priests.

The reformation deprived the people of the parish of their church but a mass rock, which is still pointed out, served their purpose during the seventeenth century.
By the time George 1 (1714) there was a “mass house” in the parish, which possibly was the decayed ruin which joined to the early Christian church in Lickmolassey and in which old people say their parents heard mass. It lasted until 1832 when Dean Galvin erected the church of Gortacooheen.

A con-celebrated mass was held on Sunday, Feast of the Holy Trinity in 1985 on the occasion of the 50th anniversary of it’s blessing and dedication.

Ulster Planters on the Clanricarde Estate 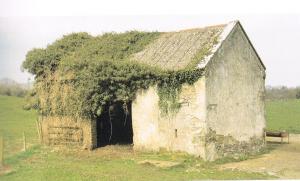 As a result of Clanricarde’s intransigence, East Galway was a hotbed of land agitation following massive evictions from his estate in 1887. Protestant planter families from the Caven-Leitrim-Fermanagh counties came to the Portumna area during these turbulent years in the 1890s. A schoolhouse was built in the townland of Claggernagh near to the Clanricarde Demense for the education of their children, and its ruin is still visible today. The schoolhouse served as a temporary golf clubhouse when during the War of Independence the original clubhouse was maliciously burned.[1] The presence of these planter families working the land of local evicted tenants always led to many disputes, boycotts and intimidation in the region.

Following a spate of evictions in the summer of 1890, Clanricarde’s agent, Mr Shaw-Tener, began to allocate the vacated farms to Ulster tenants.[2] On 30 September 1890, the Office of National Education sent a memo to Gortanumera school asking ‘what was the cause of the low average attendance’ during the last two quarters as ‘the average required for the 2nd  assistant is 105’.[3] In reply, an inspector wrote that the principal, Ms. Hurley, and Ms. Gohery, the senior assistant, were held in high esteem but that the family of the second assistant, Ms. Broder, had ‘incurred popular resentment by re-taking the farm from which they had been evicted…Children may have been kept from school owing to the feeling against the second assistant.’ Further some of the children were tenants who were recently evicted and were now living in Land League huts in the neighbouring parish of Tynagh, and attending the new national school in Killeen which was also nearer. The Inspector’s conclusion was that the numbers had so declined as to warrant Ms. Broder’s position untenable.

Due to an amendment to the 1907 Evicted Tenants Act, the Estates Commissioners resolved to purchase 4,000 acres of planter-land from Clanricarde to reinstate the evicted tenants.[4] In the following years, the planter families gradually left the area so that the National Education Office noted ‘as the average attendance or the year ended 31.3.1913 was only 17, the question of the continuance of grants arises under terms of Rule 184.’[5]

1916 – Letter from Rev. Rush to the National Education Office

On 24th April 1916, Rector Rush writes to the National Education Office that the Claggernagh teacher has left and he fears there is little chance of the school restarting due to dwindling numbers. He writes that  “owing to the Congested Districts Board taking up their holdings, the Planters have left this part of the country – most of them have returned to the North of Ireland”.

As a result of declining numbers, the Claggernagh school eventually had to close and it can be assumed that the remaining pupils were dispersed among the schools in the parish. The nearest school under Protestant management was almost seven miles away in Lorrha in North Tipperary with twelve Established Church and four Methodist pupils and with accommodation for fifty-one. [6] 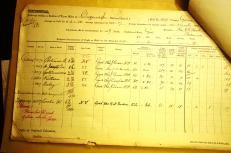 Through the persistent efforts of Reverend Edward Rush, the local rector in Portumna, in 1918 a new Protestant school called Portumna Parochial was finally granted and funded in the town with one teacher, Miss Mabel Hatch. As part of his efforts, Rev. Rushe had to list all the schools within 3 miles of Claggernagh, their religious denominations and number of pupils — giving us excellent information on the number and types of schools in the area one hundred years ago.

Rev. Rush also drew up a list of prospective pupils as part of his campaign. The list includes their ages, how far they live from the school, religious denomination, how they are currently educated etc. Names on the list:

Little else is known of its further history so far — or if it ever got off the ground.